As you come down to the National Highway No 8 (NH 8) towards Gurgaon, you will see two different faces- the old and new-of the same city.While the new city greets you with flamboyant, high-rise commercial and residential properties, the other side seems to be a deranged views of traffic jams, poor roads, scarce water supply and many more problems.

The Old city is getting a step-motherly treatment from the authorities as well as from the politicians. It is not that the new city has no problems but their problems are attended to on priority basis by the development authorities and concerned agencies. Because this is where rich, famous and influential stay. While where I stay, the Old part of the city it seems none is bothered about the civic problems being faced by the residents. It is not wrong to say that Gurgaon is being treated like an alien by the state government, even when Gurgaon generates money for the state, the infrastructure is in shambles.

Discrimination has touched such a level that even proper education and medications are not available in old city. Not just the roads are in poor conditions and commuters waste many hours in traffic jams, the problems encountered by the residents of old city are endless.

The new city is always in the headlines for one or other projects being launched for luxurious and comfortable lifestyle where as the old city, far from this gleam and razzle-dazzle, are fighting for basic amenities-like road, water and electricity. The property market of Gurgaon itself is divided into different beings altogether. Much of the action and new launches are in the New Gurgaon because of lack of space in the Old City.

NH 8 Gurgaon – Opportunistic measures vs. Opportunities for growth and development

Every time, during elections, candidates promise adequate electricity and water supply in these areas, also promise improvement in law-and-order and provide clean environment, but none of these problems are being resolved. Some of roads have been constructed by the Municipal Corporation of Gurgaon but related problems, like street lighting, sanitation and others are yet to be solved. Sadar bazar, one of the oldest markets and the nerve centre of Old Gurgaon turns into a total chaos every evening. Lack of coordination between authorities of Haryana Urban Development Authority (HUDA) and the Municipal Corporation of Gurgaon (MCG) adds to the problems of the people. It is the main reason due to which water logging and traffic problems could not be solved till date. Sometimes these agencies create hurdles for other agencies causing inconvenience to the people. I find it beyond comprehension that most Gurgaon roads have no provision for storm water drainage which causes – water logging and quick run-down of the roads. 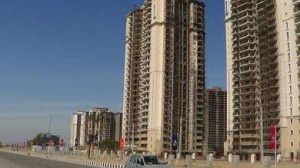 NH 8 – New Gurgaon has its fair share of problems too

As pointed out earlier its not that the New Gurgaon doesn’t have its share of the problems. Life off NH 8 is pathetic, to turn into Gurgaon or come out of it to join the highway takes 30-40 minutes at every possible arterial road. Many MNC firms operating in the Cyber City area offer incentives to people to share cars or use Metro services. As it turns out – poor last mile connectivity, bad infrastructure and snobbishness still prevents people from opting for public transport in place of owned vehicles. Moreover Gurgaon is plagued by daily power cuts that lasts hours everyday especially in the peak of the summers, this is when Old Gurgaon tries to survive on fans powered by inverters while residents of New Gurgaon continue to enjoy air conditioners powered by generator sets. The latter has a cost to operate that is almost two to three times that of normal retail power costs. 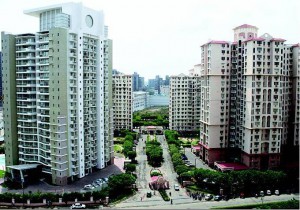 As pointed out earlier Gurgaon is a cash cow for the state of Haryana, but it isn’t getting its due credit. Within Gurgaon the Old Gurgaon, the basis of the New City (Millenial City) is being ignored every passing day – a good reason for discontent and lack of trust in administration .