At a time when the latest Hollywood flick The Jungle Book is garnering a lot of attention we decided to probe what is the National Green Tribunal (NGT) upto. NGT’s verdicts have been causing a lot of pain to realtors as well several other corporations causing any damage to the environment. NGT which was established in 2010 under the National Green Tribunal Act 2010 is a body responsible for “effective and expeditious disposal of cases relating to environmental protection and conservation of forests and other natural resources including enforcement of any legal right relating to environment and giving relief and compensation for damages to persons and property and for matters connected therewith or incidental thereto”. In simple terms, it is the caretaker of the environment and has imposed several bans and restrictions to ensure such protection which may or may not be accommodative towards several sectors such as construction, mining, chemicals etc. In the past the government bodies were found to be very liberal in granting permits to the private sector without any cognizance towards the environment. This also resulted in several disputes on grounds of improper rehabilitation and maintenance of environmental standards. NGT is a step ahead with it’s in depth analysis of the situation taking care of “merit review” and not just “law review”.

The NGT’s involvement in environmental matters will be helpful in speeding up the process of environmental justice as it is mandated to dispose of the applications within six months of their filing. The Principal Bench of the NGT has been established in New Delhi with regional branches in Bhopal, Pune, Kolkata and Chennai.

Scope of NGT: NGT has the authority to hear all civil cases relating to environmental issues and linked to implementation of laws listed in Schedule I of the NGT Act. These include the following:

Various laws enacted by States relating to forests, tree preservation etc are still outside the ambit of NGT currently and the applicant has to go through the traditional channel of approaching the State High Court or the Supreme Court in those cases. A claim for compensation falling under NGT’s regime can be made for:

In the event of failure to comply with the orders of the Tribunal the guilty shall be punishable with an imprisonment of upto three years or a fine of about Rs. 10 crore (Rs 25 crore for a company) or both. If the breach continues even after the mentioned punishment an additional fine of Rs 25000/ day (Rs 1 lakh/ day for a company) shall be levied. The body follow the ‘polluter pays’ principle and has fined several miscreants involved with polluting the environment over the past years.

The NGT has been given about 460 judgments between May 2011-Feb 2015 with cases spanning across environmental clearance, forest clearance, Pollution, illegal construction etc. It has been associated with several notable cases such as Noida Okhla Bird Sanctuary, Coal Blocks in Chattisgarh Forests, Ban on decade old diesel vehicles in Delhi, Posco case, , the Art Of Living Cultural Festival etc.

Categorization of cases filed under the NGT 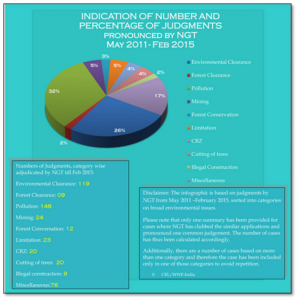 Several notable cases where the NGT has been involved are enumerated here as under:

The Posco Case:  It is one of the most important cases in NGT’s history. In 2012, the NGT ordered suspension of the establishment of the Rs 51000 crore, 12 MTPA capacity Pocso steel plant in Odisha. However, after a series of arbitrations the environment clearance (EC) was extended by the EC till 2014 with select modifications. In a recent development, the company has showed lack of interest in going ahead with the project as the ECgranted is due for expiry in 2017 and POSCO is unlikely to complete the project by then. The project has faced a lot of outburst from local bodies and environmentalists leading to dismal fate of the project since last decade. The entire course of events comes in as a radical step in favour of the local communities and forests. It is worth mentioning that the Tribunal stood its ground to support sustainable development and valued local communities above economic profit from the project.

The 10-km radius was based on a directive issued by the National Board for Wildlife (NBW) in 2005. After a series of appeals and discussions there was a set of new draft notification, by the UP Government stating that the ESZ will range from 1.27 km on the northern boundary of the sanctuary till the DND flyway and 100 meters on the others. This came in as a cheer for the thousands of buyers and even the developers lifting the projects from their limbo state since NGT’s orders.

The Goa foundation case:  It was a landmark case that established NGT’s jurisdiction in all civil cases which involve a substantial question of environment. It was held that a petition seeking of ecology of the Western Ghats by itself would be maintainable and it was legal for the applicant to approach the NGT and pray for relief within the NGT Act. Consequent to which, the Tribunal held that “Western Ghats require protection and there is a statutory obligation upon the State to protect the environment and ecology of these Western Ghats and to ensure that they are not degraded so as to harm the public and environment at large”.

The Sand Mining Order: This was another victory by the NGT wherein the Tribunal had mandated a ban on all forms of Illegal River and Ocean bed sand mining which were prevalent in the country due to the sand mafia’s influence over the sand market. The Tribunal also called upon state authorities to show cause why ‘illegal sand mining had been going on without any environment clearances’. The case received severe backlash from states against the ban calling it ‘judicial over reach’ and it also led to increased black marketing of sand. On the similar river bed protection lines, the NGT had on 25Th April, 2014 expressed concerns over the health of Yamuna River and the recreational facilities on the river. The NGT  had hence recommended the Government to declare a 52 km stretch of the Yamuna in Delhi and Uttar Pradesh as a conservation zone.

The recent Art of Living Cultural Festival on the bank of the river Yamuna had also made headlines in the country. The NGT didn’t prohibit the ‘World Culture Festival’ but slapped a fine of Rs. 5.0 crore on Art of Living Foundation for damaging biodiversity of the ecologically sensitive Yamuna floodplains.

The might of the NGT can be assessed through the recent development wherein the Supreme Court supported the NGT’s stand mandating builders to obtain all the necessary approvals for their projects before the commencement of the construction work. The NGT had in July 2015 struck down an environment ministry memo permitting post facto approvals. Such a mandate by the court will affect all builders big and small and prevent them from constructing and selling illegal projects to innocent buyers and then washing their hands off them.

There is a very fine line between the orders passed by the NGT and that of the Supreme Court and NGT has succeeded in bridging the gap between a Tribunal and the Apex Court. The Judgements are focused on three principles of Environment legislation – Polluter Pays, Precautionary Principle and Sustainable Development.