Bestech Park View Altura, Sector 79 Gurgaon, is a recently launched apartment project by the esteemed Bestech Group. The project offers 3 BHK and 4 BHK, ranging from 2015 sq ft to 2675 sq. ft, units that are well planned on a 10.10-acre site.

At the heart of Bestech Park View Altura’s master plan is the Park View concept. This includes a central park around which all the apartment towers are placed. With apartments planned only on the periphery of the project and a central park in between, all of the unit owners will enjoy views of it. Coming to the master plan one may notice that at Altura the spaces divided within the master plan are all – circular or in the shape of an arc, no space here is divided in straight line with sharp edges. Circular planning has curves with no ends and thus it merges with flawlessly with rest of the project. While one may also notice that the master plan has a flower shaped patch of landscaping which holds a water body and the amphitheater, the function of a water body is to cool down the air around it, while the amphitheater may be used for sitting or events being organised inside the township. One USP of the plan is that because the buildings are all placed on the periphery, the circulation of vehicles is prohibited in the park area, it adds to living standards and safety of residents. The extensively detailed landscape design of the central park area justifies the concept and makes this a worthwhile deal. Small gardens and patches of greenery around the buildings will keep the surroundings cool. This is in addition to nature walk and readers hut surrounded by greenery. The firm has carefully placed meditation area and yoga huts amidst the greens. All in all the project Altura at Sector 79 Gurgaon will bring its residents closer to nature with its extensive detailed landscape. Another noticeable fact about the proposal is that the courts provided are all of the standard sizes as per regulations with a mini soccer field  being a part of it making these facilities future ready.

Analysing the design of towers architecturally we found them to be both functionally as well as aesthetically sound. The placement on the master plan is done carefully to distribute the population density over the area, additional features like a proposed school within the township along with a small shopping center are placed such that the silence and atmosphere of the compound and vehicular traffic will not be compromised by buses etc.

Every tower has a double height lobby where the lift and staircase open, with a four to one core placement in towers a total of 508 flats are proposed. Analysing the floor plan we noticed that the floors on all 7 towers offer units with running balconies on either side of the unit, every room opens onto a balcony providing a feel of openness. A typical planning with kitchen and living area near the entry is functionally the best and  Altura follows the same. The rooms and spaces are designed considering luxury of the client and thus are spacious. Natural Light and ventilation here in all rooms will definitely bring down the cost for lighting during day time and air conditioning on cool days. 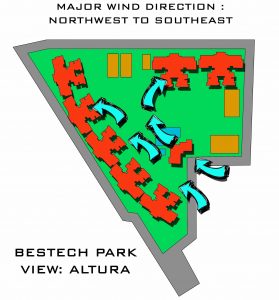 The towers here follow the contemporary style of architecture, which basically is a modern style of architecture that uses elements of design tastefully, to bring out the best of how a building could look without affecting the functionality. Here at Altura, a balanced amount of texture and glass has been used with simple metal handrails at balconies to bring out a facade that looks bold and stiff with straight lines and edges. The towers here look great without affecting the functionality of the building.

Read more about the developer on PropStory.com